The Muckleshoot Indian Tribe is composed of descendants of the Native people who inhabited the Duwamish and Upper Puyallup watersheds of central Puget Sound for thousands of years before non-Indian settlement. The name Muckleshoot is derived from the Native name for the prairie on which the Tribe’s reservation was established.

Following the reservation’s creation in 1857, the Tribe and its members became known as Muckleshoot, rather than the historic tribal names of their Duwamish and Upper Puyallup ancestors.

The Treaties of Medicine Creek and Point Elliott 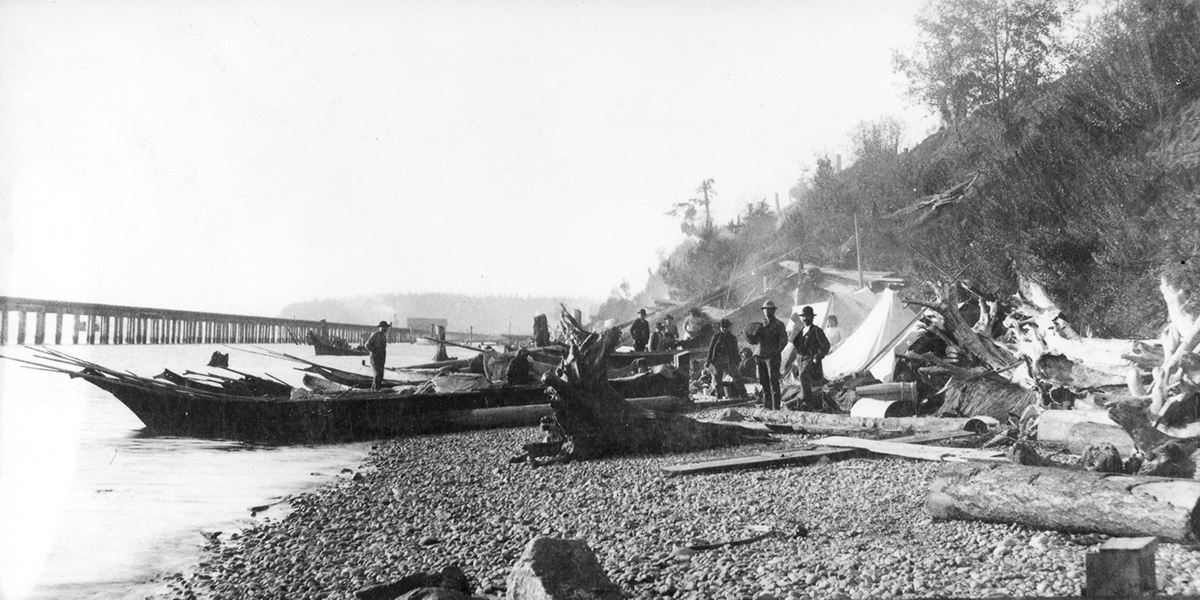 In December 1854, Territorial Governor Isaac Stevens negotiated the Treaty of Medicine Creek with the Puyallup, Nisqually, and Squaxin Indians.
‍
Governor Stevens then journeyed to Mukilteo, where he negotiated the Treaty of Point Elliott with the Duwamish, Suquamish, Snoqualmie, and other Indian Tribes and bands occupying the area between the White River and Canadian border.
‍
Under these treaties, the Native people of Western Washington ceded their territory in exchange for a promise made by the United States. It stipulated that they would retain small reservation homelands and would be free to fish, hunt, and gather the resources on which they depended at off-reservation locations.

The Establishment of the Muckleshoot Reservation

Migration to the Muckleshoot Reservation

Home on the Muckleshoot Prairie

While the Muckleshoot People had given up title to thousands of acres of land, they believed their home on the Reservation, coupled with their retained treaty rights to hunt and fish off-reservation, would sustain them, assuring the continuation of their culture and society.

Expansion of the Reservation

A Muckleshoot Constitution is Adopted 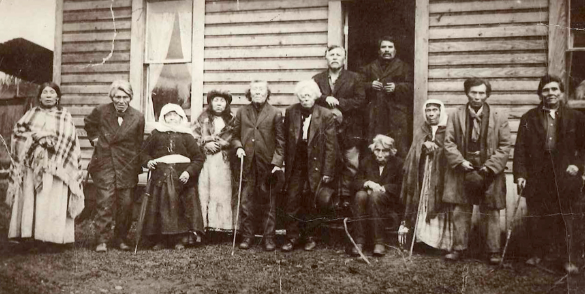 Gathering at house of Jerry Dominick on the Muckleshoot Reservation, December 17, 1917.

When the expansion of the Muckleshoot Reservation was again taken up in the early 1870s, every other section of land in its vicinity had been granted to the railroads. Thus, when the reservation was finally enlarged by Executive Order in 1874, the expansion only included land sections extending diagonally along the White River.

In 1936, the Tribe formally reorganized its government and adopted a constitution approved by the Secretary of the Interior under the Indian Reorganization Act.
‍

United States policy in the latter half of the 19th century sought to break up Tribal communal land holdings by allotting reservation lands to individual Indian families. Lands that were not allotted were deemed “surplus,” and sold off to non-Indians.

Establishing a Tribal GoverNment and Sense of Community

Courts Recognize the Muckleshoot Tribe as Descendents of the Duwamish 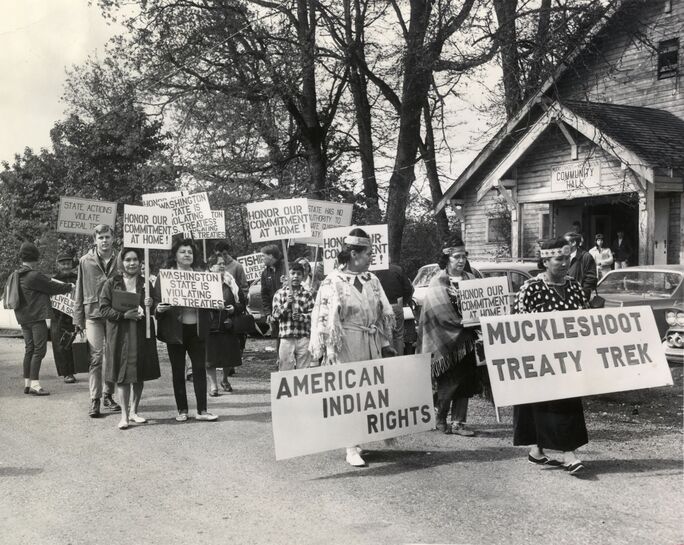 May 13, 1966 Treaty Trek on Muckleshoot Reservation.

In spite of these obstacles and a lack of resources, the Muckleshoot Tribe maintained a cohesive community and government structure; preserved its culture; and built its own Community Hall.

In the 1960s, the Muckleshoot Tribe, together with the Puyallup and Nisqually Tribes, repeatedly challenged state efforts to prohibit Indian fishing at traditional fishing locations.
‍
In 1970, these actions led the United States to file a lawsuit against the state of Washington to definitively determine the nature of the fishing rights reserved in the treaties concluded by Territorial Governor Isaac Stevens.

The Muckleshoot Tribe, along with other Pacific Northwest Tribes, joined in that lawsuit. The United States v. Washington decision was rendered in 1974 and subsequently upheld by the U.S. Supreme Court. It held that the Tribes that are party to the Stevens Treaties are entitled to take 50% of the fish available for harvest at traditional Tribal fishing locations free from most state regulations.
‍
The Court also affirmed United States’ recognition of the Muckleshoot Tribe as a political successor to Duwamish and Upper Puyallup bands that were party to the Treaties of Point Elliott and Medicine Creek, including the Duwamish band to which Chief Seattle belonged.

An Era of Economic Rebirth for Muckleshoot

By the early 1900s, almost all Muckleshoot Reservation land had been allotted to Muckleshoot families. Faced with severe poverty, many families had little choice but to sell their property in order to survive. By the 1970s, Tribally-owned land had dwindled to less than one acre, the site of the Muckleshoot Community Hall. When a fire destroyed the building, only a stone chimney remained.
‍
But from the ashes of that lowpoint, the Tribe rose for an incredible rebirth. The renewed access to fishing resources that had long been denied by the state of Washington resulted in a revitalization of Tribal economies and communities throughout Western Washington — including the Muckleshoot Tribe.
‍ 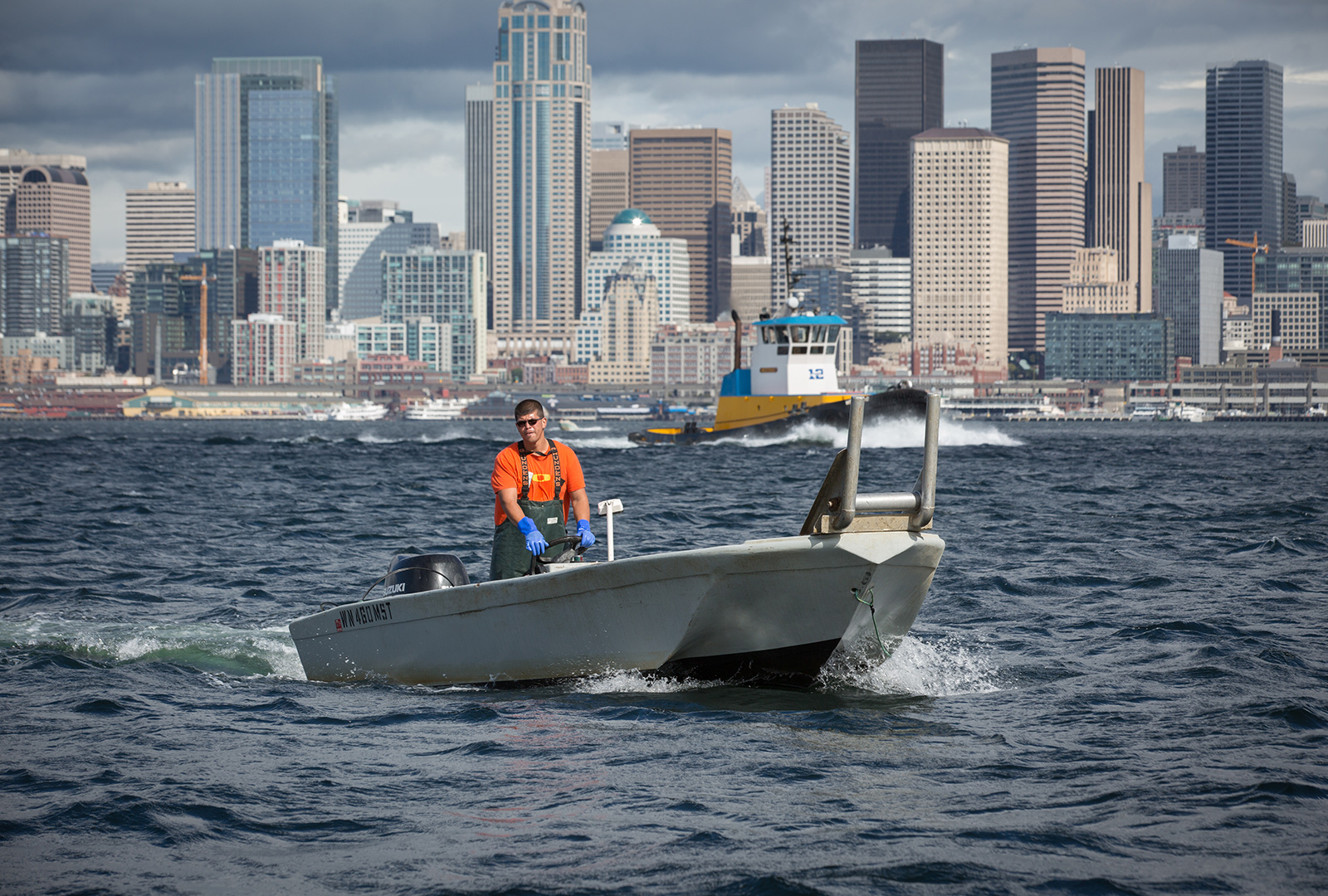 Beginning in the 1990s, this revitalization accelerated with the introduction of bingo and casino gaming on the reservation, and has continued with the diversification of the Tribe’s economic enterprises and investments.

With revenues from businesses established after the Boldt Decision, a landmark treaty rights victory for Western Washington Tribes, the Muckleshoot began buying back reservation land.
‍
The Tribe’s systematic approach to land requisition continues today as it rebuilds ownership of the reservation. As of 2020, the reservation lands totaled nearly 4,000 acres. In addition, the Tribe owns the Tomanamus Forest, 105,000 acres of working forest land in King, Pierce, and Lewis counties that helps provide educational, career, and recreational opportunities for Muckleshoot members.

Job Creation Abounds on and off the Muckleshoot Reservation 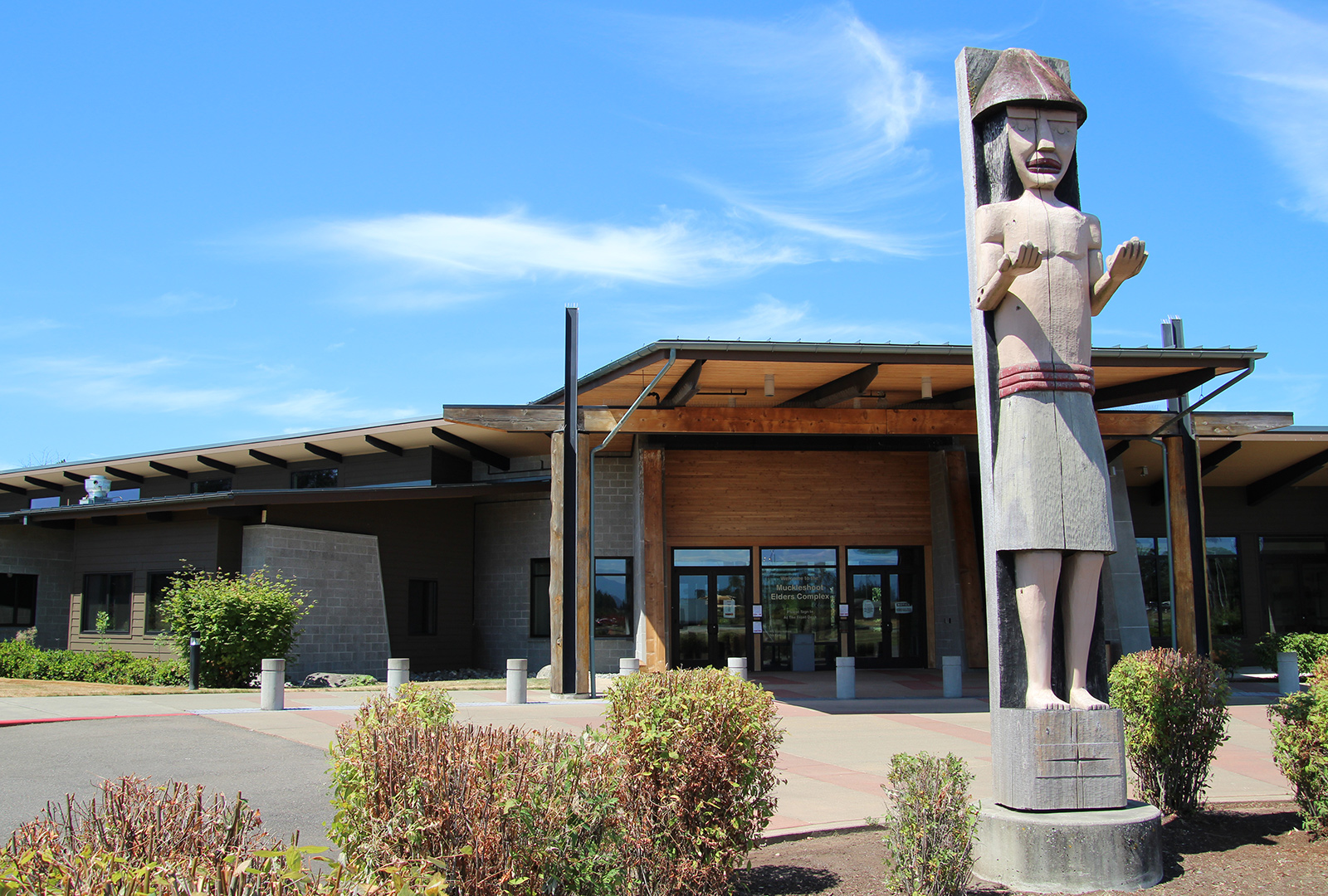 The abundance of natural resources which once formed the backbone of Native economies has diminished over time. While Tribal members continue to rely on fishing and hunting, today reservation-based economic enterprises provide Tribal members with jobs, educational opportunities, healthcare, housing assistance, and other important services.